I think that this will be my last post until after Passover. My all of you that celebrate Passover have a wonderful holiday. I join Rafi in his prayer for the holiday.

Speaking of freedom I saw something bizarre yesterday and caught it on film. As my bus to Tel Aviv got off on the Kibbutz Galuyot exit, I saw a parrot on a tree, free as a bird! Parrots do not live in the wild in Israel. This guy must have escaped home, or perhaps his owners decided that they did not want to care for him anymore. Click on the picture to see an enlargement: 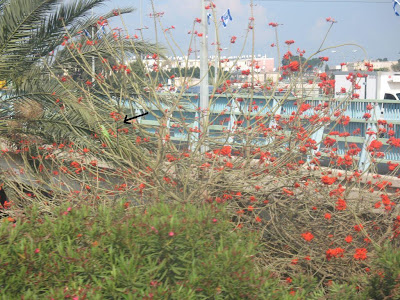 Update: The bird is apparently a Rose-ringed Parakeet, a bird that was not a native of Israel but has made itself at home. (Hat tip: Zman Biur).

The ring-necked parakeet (Psittacula krameri) apparently spread naturally from Egypt, where it was introduced from India, although there is a possibility that the Israeli population originated from escaped or released pets during the 1960s (Dvir, 1988). It started breeding during the 1980s, and is now very common in the coastal plain and northern valleys, as well as along the Jordan Valley. Roosts of thousands are located along the coastal plain and other areas.

Hope you and your family have a wonderful pesach and many many more to come with much blessing.

have a happy, kosher, and safe pesach

I just finished scrubbing my stove/dishwasher, and am about to scrub the kitchen floor (with a sponge--forget the mop!)

Now...If I only had someplace to go for second seder...(and no, coming to your second one, wouldn't work..too little time, but thanks for the thought-heh..

That's not a parrot, it's a parakeet, and while they're certainly not native to Israel, they have taken up residence in the wild in some areas. See:

Thanks. I hope that you all had a wonderful Passover.

Thanks for the info. My best guess now is that it was a Rose-ringed Parakeet.