The service on the line to Jerusalem, which opened in 1892, was suspended in 1998 due to the poor state of the track. However, it has recently been rebuilt and upgraded. The section of this line to Bet Shemesh re-opened in September 2003, while the remainder of the upgraded line to Jerusalem opened in April 2005 together with the opening of the new Jerusalem Malha Station in Southern Jerusalem. In October 2004, a new line from Tel Aviv to the new Terminal 3 at Ben Gurion International Airport was opened. From there this line will continue as a brand new high speed line currently being built to Jerusalem with a spur to Modi'in. This difficult to construct line will be electrified and make extensive use of long railway tunnels in order to make it possible for trains to achieve high speeds as they make their way from the coastal region to the mountainous Jerusalem area. In its first phase this line will terminate at a new underground station under construction underneath the Jerusalem Central Bus Station in Central Jerusalem. There are future plans to extend the line from the Jerusalem Central Bus Station so that it will connect with the (now upgraded) historic railroad that already reaches Southern Jerusalem. The ride on the new high-speed line from Tel Aviv to Jerusalem will take 28 minutes. The line is expected to be finished sometime around 2011.

Here are a couple of pics from the building site of the train station in Jerusalem: 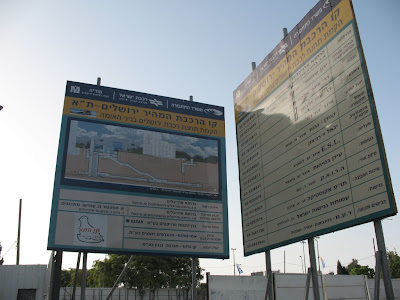 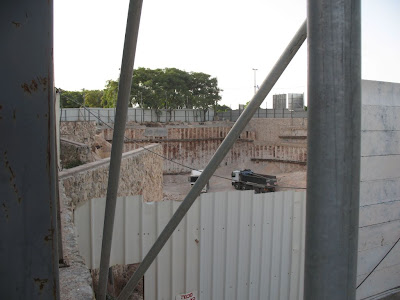