A Mourning Notice In Jerusalem 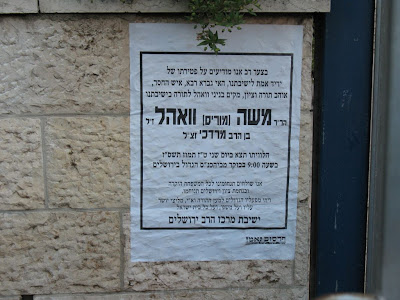 This is old news. I should have posted this earlier:

Maurice Wohl, one of the most generous donors to the State of Israel, died in London Sunday at the age of 84. He will be buried in Israel on Monday.

Wohl contributed tens of millions of dollars to the construction of public structures, all of which bear his name. These include an amphitheater in Ganei Yehoshua in Tel Aviv, an archaeology museum in Jerusalem and an auditorium in Bar Ilan University. A recently completed convention center in Bar Ilan University is named after his wife, Vivian, who passed away in 2004.

Wohl also established a fund that contributes to the medical community in Israel, and gave out thousands of scholarships to students in Bar Ilan University.

Maurice Wohl, the prominent British Jewish philanthropist, will be buried Monday in Jerusalem. Wohl died Thursday in London of heart-related complications. He was 83.

A self-made real estate magnate, Wohl was known for his generosity. The president of the Jerusalem Great Synagogue, he was also a benefactor of Bar-Ilan University, Shaare Zedek Medical Center in Jerusalem and Ichilov Hospital in Tel Aviv, as well as many other Israeli institutions.

"When a book is written about the great Jewish philanthropists, there will be a very thick chapter on Maurice," said Zalli Jaffe, vice president of the Jerusalem Great Synagogue.

Born in London to working class, Eastern European immigrants, Wohl had long been active in philanthropic causes both in Israel and abroad. He and his late wife, Vivienne, donated the rose garden opposite the Knesset that bears their name, and Wohl was honored with the title "Trustee of Jerusalem" (Ne'eman Yerushalayim). Wohl, also made a Commander of the British Empire (CBE), split his time between his homes in London, Geneva and Tel Aviv.

"He was the kind of philanthropist who believed in charity not because it gave him prestige but because it was right and because it was good for other people," Prof. Moshe Kaveh, president of Bar-Ilan University and a personal friend, said Sunday.

Friends say Wohl's public philanthropy was only a small portion of his largess. "There are so many people in need that he helped privately, quietly and one-on-one," said Rabbi George Finkelstein, director general of the Jerusalem Great Synagogue.

The funeral will take place 9 A.M. at the Jerusalem Great Synagogue, followed by burial at the Sanhedria Cemetery.