I mentioned in a previous post the ingenuity of Meir Porush's campaign. Today's post will deal with the flip side of the coin. How does Nir Barkat market himself to the religious public?

This advertisement in the national-religious Besheva weekly newspaper gives us the answer: Off with (the top) of his head! 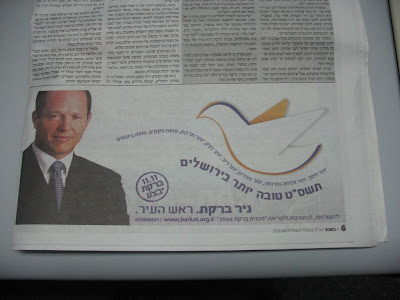 The average religious reader isn't foolish. He knows that Nir Barkat doesn't sport a yarmulke which by chance got cropped out of the picture. However, by cutting off the top of his head, Barkat's advertising firm dulled the brazenness of Barkat's bare-headed appearance in the eyes of the religious public.

Such is politics in Israel. I can't wait till this is over!

And BTW, check out what is going on in Beit Shemesh.
Posted by Cosmic X at 4:55 PM