Another Mystery Tree In Jerusalem

This one is easier than the previous one. Do you know what kind of tree this is? 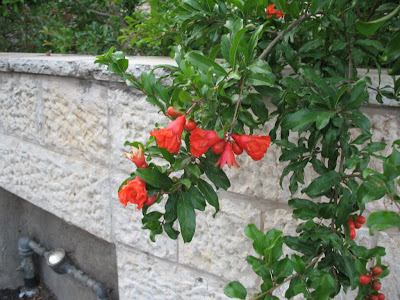 Update:Wow, I am surprised that nobody got this one. It is a pomegranate tree (rimon in Hebrew). This is how it looks in the flowering stage. Some of those flowers will become full fledged pomegranates.

The pomegranate is one of the "seven species" that the land of Israel was praised for:

This fruit is also plays a role in many midrashim:

"Did the pomegranates blossom yet?" [in the Song of Songs] - this refers to the young children who sit and learn Torah. They sit in rows like the seeds of the pomegranates. (Shir HaShirim Raba, 6, 17)

And of course there is this famous midrash:

Anyone who has ever eaten this exotic fruit is well aware of the extraordinarily large number of seeds it contains. King Shlomo’s comparison (Shir Hashirim 4:3) of this fruit to the Jewish people leads our Sages to finding merit even in those Jews whose standard of observing the mitzvot leaves something to be desired.

In another place (Berachot 6a) this appreciation of Jews is extended to the entire nation. Even the unworthy ones, our Sages tell us, are so filled with mitzvot like the pomegranate is filled with seeds that these merits will protect them against the fires of retribution in the World to Come.

Me too simple jew.They are great.

I think its a trumpet vine rather than a tree. They grow up into trees and almost seem a part of them. The nice part about them, although they eventually kill the tree is that they attract humming birds.
Is it a trumpet vine?

Thanks. They are much better than my political rants! :-)>

Thank you too. Never heard of a trumpet vine.

It sure is pretty. It is tasty as well!

Rimon!! Wow. Ok so you are giving us an education too. Thanks.

The poster mourning the late Mr Wohl, was put up by Yeshivat Mercaz Harav {Kook} whose Bet Midrash Bldg was donated by Mr Wohl.

Based on your pictures of the street sign and the pomegranate tree, I would assume the sign was on or near the Yeshiva

I think it would be a great chesed as well as zchut to mention the support of Torat Eretz Yisrael to the info on the niftar.