A Wild Beast Of An Ophthalmologist

Standing about 189 cm (6 ft 3 in), Assad has a distinct physical build. He speaks English from an intermediate to an advanced level [1] and is fluent in French, having studied at the Franco-Arab al-Hurriyet school in Damascus, before going on to medical school at the University of Damascus Faculty of Medicine. He then went on to get subspecialty training in ophthalmology in London's academic hospitals. 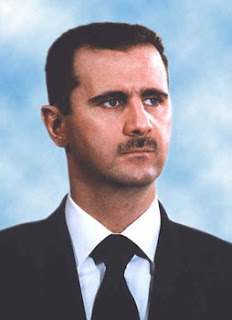 (Photo courtesy of The Syrian Embassy)


How can such an educated man be such a despot? Perhaps this is the answer:

The following story is brought down by the revered Rabbi Dichovsky, of blessed memory, in his book, "Neot Desha," on the Talmud. In the introduction, he recounts his visit to the Chofetz Chaim to ask him this very same question about moving to Israel at a time of clear and present danger. We quote:

"I saw it proper to record a statement made to me by the most pious of all of the kohanim, the Rabbi of all Israel, the glory of the generation, the holy of all Israel, may he be blessed in memory, in the matter of Aliyah. I asked him about this question, and the following are the details of our encounter.

"It was the beginning of the year, 1933. There was a group of Torah scholars who had organized themselves to go together to Israel to learn Torah. I too was amongst them, but I had many doubts, because I knew that many of the great gedolim (Torah scholars) of Israel were opposed. The heads of my yeshiva were especially opposed to the idea that yeshiva students would go to Eretz Yisrael, even for the sake of studying Torah. They said that the proper conditions had not as yet been established in order to facilitate Torah study with the proper diligence in the Holy Land, to the extent that we are able to study Torah in the yeshivot in the Diaspora. Therefore, I said in my heart, that I must not ask my rabbis in this matter, for obviously the answer will be no.

"Like Rabbi Zera, who ran away from his teacher, Rav Yehuda, when he wanted to make Aliyah to Israel (Tractate Ketubot, 110B,) I decided to go and ask the counsel of the righteous tzaddik of our generation, our revered master, and to receive his blessing before I departed. Therefore, just before the Day of Atonement, I journeyed to the yeshiva of the Chofetz Chaim in the town of Radin, where I stayed in the shadow of this great, righteous individual. This was, as is known, the last Yom Kippur of this special tzaddik, for at the end of the year, in the month of Elul, he was taken to the yeshiva Above, may his merit be a shield to us and all Israel.

"In spite of his great physical weakness, a Heavenly Providence was with me, and I merited to see him the day after Yom Kippur. I told him my situation, and that I had a good chance of making Aliyah to Israel as a Torah student, only I had lingering doubts if I would be able to learn Torah with the same diligence with which I was learning now. Immediately, he answered, in his famous sweetness of speech, that there was no room at all for my wariness. Why in the world would I not be able to learn Torah there with absolute diligence – just the opposite would seem to be true, for the Land of Israel, without question, was more conducive for steadfast immersion in Torah. He recited the verse, ‘The gold of the Land is good,’ on which the Midrash says, ‘This gold are the words of Torah, for there is no Torah like the Torah of Eretz Yisrael; and there is no wisdom like the wisdom of Eretz Yisrael.’

"Before I could express the rest of the doubts that I harbored - especially the fear of the danger in Israel because of the children of Ishmael who were marauding violently against the Jews, for only a few years had passed since the end of the Hebron Massacre in the year 1929, which made clear to everyone the wild, bestial nature of the Ishmaelites, who with savagery and unbounded cruelty massacred Yeshiva students and showed no mercy even to the women and children - before I was able to confess all of my apprehensions, the Rabbi answered the question himself.

"Then the Chofetz Chaim let out a long, painful sigh and said, ‘Who knows what this wild beast of a man is capable of perpetrating against the Jewish people in the end of days?’ "Concluding his words to me, he said, ‘Nevertheless, fear not. There is no reason for this to prevent you from making Aliyah to the Land of Israel.’
"Then he blessed me, saying, ‘Go in peace, and the L-rd will bless your path.’

"So I left him, and journeyed in peace to the Holy Land."