The Joy Of Doing A Mitzvah

Most Jews never perform the Mitzvah of giving Reishit HaGeiz (wool shearings) to a Cohen because most Jews don't own sheep. The same is true with regards to giving the zeroa, lechayayim and keiva (foreleg, cheeks and stomach) to a Cohen.

Rav Zalman Melamed, the Rosh Yeshiva of Yeshivat Beit El, decided that he wanted to perform these Mitzvot. Arutz 7 has the story:

The story began several years ago when Rabbi Zalman Baruch Melamed, the rabbi of Beit El and the dean of the town's yeshiva, began to wonder when he might ever have the chance to fulfill the Biblical commandment (mitzvah) of Reishit HaGez - giving to the Cohen (the priest) the first cuttings of the fleece of sheep grown in the Land of Israel.

"After looking for a while," the rabbi told the assembled crowd of hundreds of adults and children at the joyous ceremony, "about 2-3 months ago, I finally found what I was looking for - right under my nose, here in Beit El." It turned out that a local resident with initiative, Chai Harush, had bought 20 sheep several months before.

Be sure to read the rest of the story.

The continuation of the Arutz 7 story took place in Yeshivat Merkaz HaRav in Jerusalem. Cosmic X was there and here are some pics:

Can you see the joy of doing a mitzvah? Seated from left to right: Rav Yaakov Shapira, Rav Avraham Shapira, Rav Zalman Melamed, Rav Eliezer Melamed. In the foreground is a basket with "resihit hageiz" decorated with flowers: 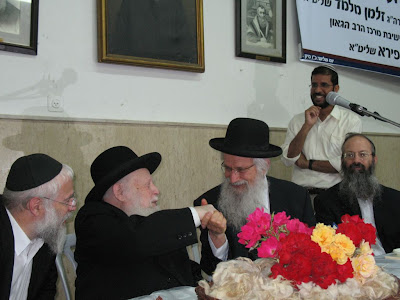 On our left is a plate with the zeroa. The other plate contains the lechayayim and the keiva: 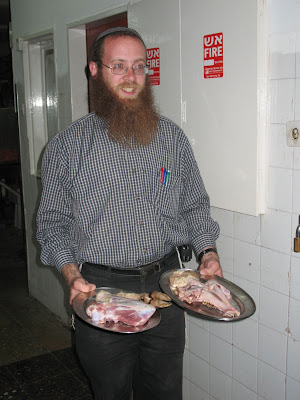