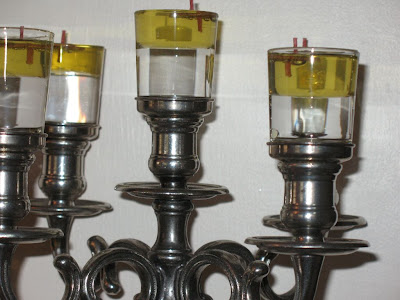 A little bit about the Jewish people and olives:

The Jewish nation is compared to the olive by the Prophet Yirmiyahu:

"Hashem has given you the title of a beautiful, fresh olive." (Yirmiyahu 11:16)

Several explanations are offered by our Sages for this comparison.

Rabbi Yitzchak sees in it the fulfillment of Jewish destiny in the end of days. When the Patriarch Avraham came to the ruins of the Beit Hamikdash to pray for his exiled descendants, G-d reassured him that, despite their serious sinning that precipitated their exile, there was still hope for their survival and return. A voice from Heaven quoted the above comparison to the olive, explaining that just as the true essence of the olive is the oil which can be extracted from it at the end of its existence, so too will the true essence of the Jewish nation emerge at the end of days. How this massive return to G-d will be effected has already been outlined by our Sages who stated that in order for Jews to be worthy of redemption by Mashiach a wicked ruler will be imposed upon them by Heaven, whose draconic decrees will motivate Jews to repent their ways and return to G-d.

This concept is echoed by Rabbi Yochanan who pointed out that just as the oil is extracted from the olive by crushing it, so too do Jews return to the proper path only through suffering.

Maharsha makes an interesting observation regarding the relationship of the olive to its oil. In the Torah listing of the seven agricultural species for which Eretz Yisrael is famed, the olive is described as the "oil-producing olive" (Devarim 8:8), for it is the oil rather than the fruit that is the true essence of the olive.

Jewish survival is the theme of the comparison to the olive in the approach of Rabbi Yehoshua ben Levi. His focus, however, is on the tree bearing the olives rather than the oil produced from them. Just as the olive tree does not shed its leaves both in winter and summer so will Jewry remain both in this world and in the Hereafter. Maharsha explains that winter is an allegory for the difficulties that Jews suffer in the generations preceding Mashiach, while summer symbolizes the era of redemption that awaits them.